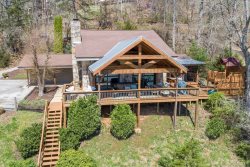 CHOOSE A NORRIS LAKE VACATION
For your next vacation, Norris Lake in East Tennessee has plenty to offer regardless of the season. Norris Lake and its surrounding mountains and parklands like Big Ridge State Park offers much more scenic beauty, solitude and plenty of fresh water activities for the entire family. If you’re new to our incredible lake area, let us help you make plans for your arrival so that your vacation begins immediately when you step into one of our beautiful Norris Lake vacation cabins. After a memorable vacation at Norris Lake, you’ll head back home refreshed, relaxed and looking so forward to another visit next year.

Jump to a Rental